So I just picked up a few new games for my collection, 2 Game Boy games (one of which is Probotector!) and a Nintendo DS game.

One of them I’m really excited about, namely Probotector. However, if you’re not from Europe, you may know it by another name; Contra! (or Operation C as it’s known to some). I had to play it as soon as I got it and man did it bring back memories of previous games in the series. The Game Boy didn’t skip a beat, plays as awesome as the original. This is the first time I’ve ever played a Contra game on a portable, and feel great that I can take it with me and play anywhere. Who needs a Nintendo Switch when an old Game Boy can gives you exactly what you want.

For the uninitiated, Probotector / Contra  is a 2D run and run action shooting game. One of the best parts of it is it’s Awesome music and is incredibly satisfying to play. Nothing makes you feel tougher than perfectly paced action set to some kick-ass music.

Another game I just got is quite a mouthful, Wizards & Warriors X – Fortress of Fear also for the Game Boy. I tried this one out as well and it’s a fairly basic platforming action game, but man, look at that cover. Smexy man muscles and a total Conan the Barbarian vibe. You play a knight with a sword and you have to battle wild animal like bats and giant snakes, and dodge the occasional arrow or canon ball flying at you from off screen. There’s also some story beats with text popping up that add context to your adventure. It’s fun in a vanilla kind of way. It’s no Probotector, but still fun to play.

And lastly, I got Scribblenauts for the Nintendo DS. This is a fun little game that revolves around the idea of using your imagination and spelling to pass stages. Quite simply, you’re put in a situation where you need something in order to pass, and you’re tasked with figuring out what you need. Here’s what’s cool about it though, it can be practically anything you want, you just type an object into a keypad and it manifests in the game. Need to get to the roof of a house? Type “Ladder” and one will magically appear, and all that remains for you to do is to position it and then climb up. This game is fun for everyone and I’m glad to have it in my collection :). 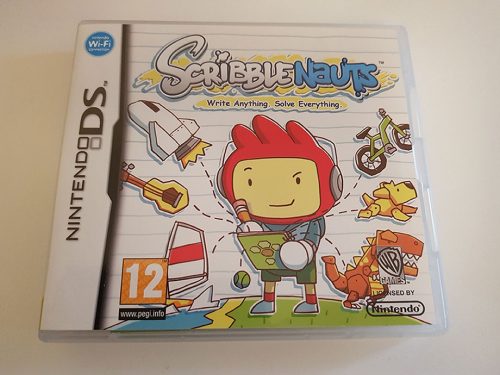 I'm your friendly neighborhood blogger and handicapped game collecting enthusiast from Sweden! And I post short articles and videos about games and game consoles both new and old, game collecting, and about things that I've added to my collection. Hope you'll join me as we punish our bookshelves with the weight of all the great games we add! View all posts by Raz